Albrecht von Alvensleben is a self-taught photographer, born in 1984, in Swakopmund, Namibia, South Africa. At the age of five, von Alvensleben and his family moved to Northern Germany. After high school in Waterford, Ireland, von Alvensleben studied architecture at Vienna’s University of Applied Arts before transferring in his final year to New York City’s Cooper Union School of Architecture in August 2009, with a full tuition scholarship. He started photography with a 35mm film camera and trained himself by experimenting and reading books and photography magazines. His photographic styles include abstract, landscape, architectural, and documentary. He now uses the digital Canon 5d Mark 2.

In June 2009, von Alvensleben completed his first photographic series, “Backlight” (or in German: “Rücklicht”), which was included as part of an exhibition titled “Uprising Six” (six emerging artists’ work was represented) at the Candela Project Gallery, in Munich.

Over the course of several days and nights, von Alvensleben photographed the 150 year-old glass windowpanes in the doors of his Grandmother’s house in Celle, northern Germany. The glass was photographed at close-up range from inside and outside the house with a light intensive 250mm focal zoom lens. The structure and inherent textures within the glass fascinated von Alvensleben. When magnified, the bubbles and the combination of both sharp diagonal and curved smooth lines in the glass form highly abstracted compositions. In a process-based experiment, the artist positioned various colored objects inside and outside the window and was interested in how the colors played together with the affect of different lights. Many of the photographs have red as the dominant color, achieved when he illuminated the window with the rear red (brake) lights of his car, at night. The house lights were off so it was dark inside and very bright outside, creating a glowing effect. The overall result is a surreal play of colors and expressive, painterly forms that are highly abstracted and decipherment of objects is not possible.

The following limited editions from “Backlight” were printed on paper and mounted on dibond/alumium and acrylic glass.

Available sizes and pricing in USD: 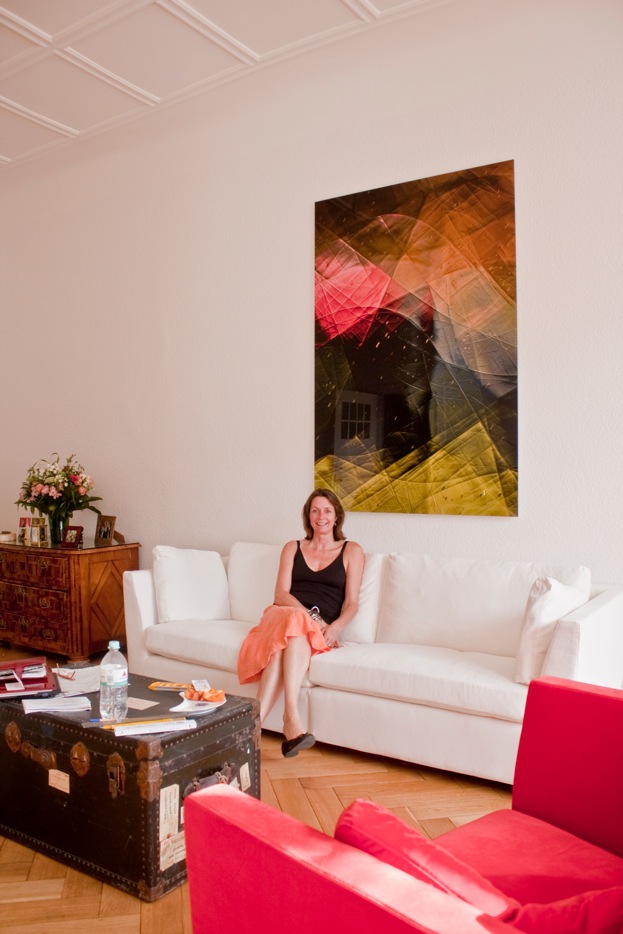 In E 356, the artist’s sister stands on the outside courtyard, wearing a green skirt. The photograph illustrates what happened when different colors filtered through the textured, old glass. The colors merge together in places, and show a broad range of the spectrum. Metallic glowing surfaces are created; areas of intense illumination become pure white. The magnification defines the strange formations of the glass, creating abstract reflections that are intriguing and soothing to the eye. With only minimal digital contrast manipulation used to add value and saturation – white areas become stark, and black areas intensified and richly colored shapes are created. The viewer retreats into a dreamlike state, such as when staring up at the moon until it becomes double, due to the loss of focus. The blurring of objects and the texture of the glass give the images a mysterious painterly quality; the viewer questions which medium the artist has used.

In E 360, the colors come from green trees and, in the foreground, the bright white courtyard of the house.

E 362 is taken from outside. The lights are inside the house, it’s night and the objects of everyday life the artist used near the windows included lamps, colored wallpapers, and flowers.
Inspirations and references to art history

Von Alvensleben began taking portrait photographs of his sister at a young age and gradually his passion for experiment-style photography became an insatiable force in his life. He also knew at a young age that he wanted to study architecture. At the age of 12, von Alvensleben was greatly inspired by a painting in his grandmother’s house by the German-American expressionist painter and cartoonist Lyonel Charles Feininger (born in New York City, July 17, 1871 – January 13, 1956). Von Alvensleben began copying Feininger’s work in simple black ink pen. Feininger’s subjects were often buildings, meticulously painted and fashioned entirely from straight lines and intersecting planes of color and light. Influenced by Cubism and Orphism, Feininger breaks up his subjects into shards of what looks like stained glass, with the angular elements uniting and overlapping to form stylized, shimmering images. The influence and correlation between von Alvensleben’s choice of architecture as a career and his photographic subject matter and style is very much linked to the Bauhaus philosophy. Interestingly, Feininger taught at the Bauhaus for several years and famously designed the cover for the Bauhaus 1919 manifesto: an expressionist woodcut ‘cathedral’. In the Bauhaus manifesto, Walter Gropius proclaimed a “new unity” of art and technology, which would reach its highest expression in architecture:

The ultimate aim of all artistic activity is the building! To decorate it was once the noblest task of the visual arts, they were indissoluble components of the great art of building. Architects, painters, and sculptors must once again come to know and comprehend the composite character of a building, both as an entity and in terms of its various parts.

Umberto Boccioni: Dynamism of a Soccer Player, 1913, Oil on canvas 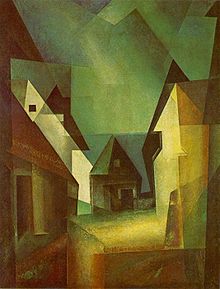 More photographs by the artist can be viewed on the photography website, SeenBy:http://www.seenby.com/albrecht-von-alvensleben

Although now a conservative medium amongst art collectors, it was not until the 1970’s that major auction houses, such as Christie’s and Sotheby’s, created specialty departments dedicated to the art of photography. It has since become an increasingly valued and collectible medium of fine art.

With New York City now as his career base, Albrecht von Alvensleben is travelling in June 2010 to oversee the construction of his first architectural design, a house, in South Africa. While he is there he will continue on a series of landscape photographs (below). Von Alvensleben has also two other incomplete photographic series that he will finalize in 2010.